Why the Praying Mantis Still Shakes 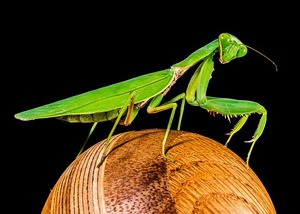 Anansi is often a character in Ghanaian folktales. He is a mischievous spider.

Long ago, Oyankopon (“god”) had a large farm full of yams. Everybody talked about it in every corner of the world. It was the most beautiful and the largest of all the farms in the world. Everyday people came from everywhere to admire it.

As harvest time was approaching, Nyankopon announced to the inhabitants of the whole world the day the harvest would take place. Upon hearing this, men and women, from north to south and east to west, were full of joy. Not a single day passed without people talking about this great event.

However, there was one person who was jealous of Onyankopon and who wanted to spoil his fortune. He was no other person than Anansi the Spider. He was so jealous that he decided to steal all the yams.

Every evening Anansi the Spider went to uproot a large quantity of the yams and send them to his own farm. Nobody detected the theft. His wife and children did not know. Onyankopon himself did not know. Days passed. Night turned into day. Weeks passed. The harvest day was fast approaching. Preparations for the great event were underway.
One day, Onyankopon decided to go and visit the farm for the last time before the great event. He saw that nearly all the yams have been uprooted. Onyankopon ordered the search for the thief. “Bring him dead or alive,” he said.

The search for the thief started immediately. A week passed, two weeks passed. Weeks turned into months. The thief was not identified and the yams continued to disappear from the farm. Finally, Onyankopon decided to lay traps in the farm. Old Anansi the Spider knew nothing about the traps until one evening he fell into one.

Anansi became sad. He knew that people were going to find him trapped in the farm and identify him as the thief before daybreak. The sun began to rise and Anansi lost all hope. His eyes were full of tears. What a misfortune!

Then he saw the first person coming from far away. Who could this be? He wiped off his tears to see properly. And what did he see? A friend, the praying mantis! Anansi the Spider signaled to him.

When the praying mantis was within earshot, Anansi shouted, “Oh, it's you who is coming to replace me?”

“To replace me? How?” demanded the praying mantis in astonishment.

“So you are not the one? But when is my replacement coming? My god. Why do they let me suffer like this?” said Anansi.

“What is this about?” inquired the praying mantis.

“What? Don't you know that were keeping watch for Onyankopon? Are you not aware that we are searching for the thief who has been carrying away Onyankopon's yams? It has been three days now since I have been keeping watch for this dangerous thief,” the sneaky Anansi replied.

“Oh, good, I don't know anything about this,” said the praying mantis.

“What could I do for you, Anansi? You must be suffering a lot. What do you need?” replied the praying mantis.

“If it would be okay, come and replace me for a little while I go down to the village to find something to eat,” Anansi the Spider said in his friendly tone.

“I will do that for you, but please don't keep long,” replied the praying mantis.

“You can count on me, my friend. Come and put your leg here,” said the cunning Anansi.

“What, is that not a trap?” the praying mantis questioned.

“A trap? What an idea. You don't trust me?” replied Anansi.

“But that looks like a trap,” the praying mantis questioned.

“You take me to be a fool then?” Anansi replied.

The praying mantis allowed himself to be duped. He helped Anansi to remove his leg from the trap putting his in its place. What an unexpected chance for Anansi the Spider. As soon as Anansi was freed, he ran quickly towards the village shouting at the top of his voice, “I have see him, I have seen him. I've seen the thief, the thief who has been stealing the yams of Onyankopon. I've seen him at last. He is there at Onyankopon's farms, trapped by a trap.”

A large crowd soon gathered. There were curses and threats everywhere. Everyone wanted to vent his anger on the one who had caused much suspicion among them. In no time at all, the villagers were in the farm. In front of them was Anansi the Spider who led the way to the praying mantis.

“There he is, the thief,” he said, pointing to the praying mantis. The praying mantis had wanted to escape but it was in vain. The villagers rushed on him beating him brutally until he became unconscious. When they thought that he was dead, they left him in the farm. But the praying mantis did not die. He regained consciousness. But when he got up his whole body was shaking, and what was more, he could not see well.

He felt dizziness and to this day, the praying mantis still feels dizzy whenever he walks.