The Idea of Nelson Mandela 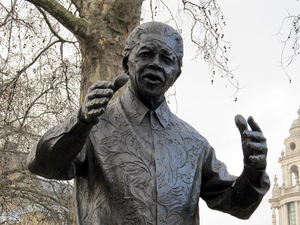 The African National Congress carried the hopes of so many for so long. But it collapsed into a serious moral and political crisis in exile. It was the great tide of popular hope, grounded in popular action and the political strength of Cosatu and the United Democratic Front, and drawn into the messianic aura around Mandela, that carried us into democracy and illuminated its early days with a brilliant light. Today the ANC is corrupt and brutal—its emancipatory energies have been squandered and when its glorious moments and the grand heights of the political vision are recalled, even in good faith, by the party’s leaders they invariably function to legitimate the squalid reality of its degeneration rather than to catalyze renewal.

In death it may, in time, be easier to affirm Mandela, as he always wanted to be understood, as a man rather than a saint. But as Mandela returns from myth and into history we should not, amidst the humanizing details of his life as it was actually lived, or the morass into which the ANC has sunk, forget the principals for which he stood. We should not forget the bright strength of the Idea of Nelson Mandela.

Mandela was a revolutionary who was prepared to fight and to risk prison or death for his ideals—rational and humane ideals. In this age where empty posturing on Facebook or reciting banal clichés at NGO workshops is counted as militancy, where rhetoric often floats free of any serious attempts to organize or risk real confrontation, where the human is seldom the measure of the political, we would do well to recall Mandela as a man who brought principle and action together with resolute commitment.

Mandela was also a man whose ethical choices transcended rather than mirrored those of his oppressors. Amidst the ongoing debasement of our political discourse into ever more crude posturing we would do well to remember that no radicalism can be counted as adequate to its situation if it allows that situation to constrain its vision and distort its conception of the ethical

Nelson Mandela has passed from this world but the Idea of Nelson Mandela remains with us. It’s our world now and there are many rivers to cross (Pithouse, 2014).